Arnold And His Love Of Aviation

Next to marrying his wife, Winnie, and deciding on a professional career in golf, there’s only one decision Arnold Palmer considers smarter. Learning how to fly an airplane. 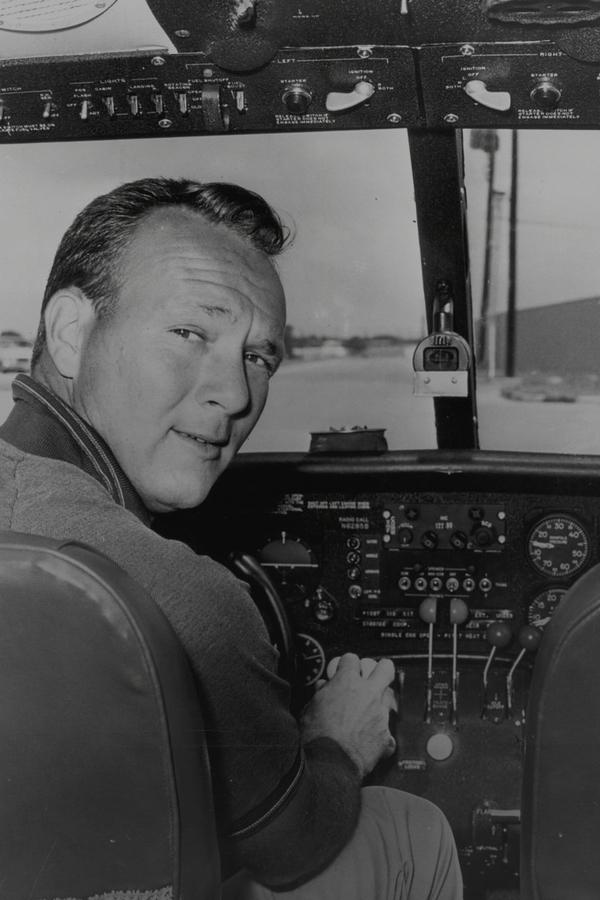 Arnold and His Love of Aviation

Next to marrying his wife, Winnie, and deciding on a professional career in golf, there’s only one decision Arnold Palmer considered smarter. Learning how to fly an airplane. Like so many boys growing up, Arnie had a fascination with aviation and he liked building balsa wood models. But it went far beyond that. About a mile from his home on the perimeter of the Latrobe Country Club was a small airport.

“Next to marrying his wife, Winnie, and deciding on a professional career in golf, there’s only one decision Arnold Palmer considers smarter. Learning how to fly an airplane.”

Arnie enjoyed spending time at the old terminal building listening to pilots trade stories about their adventures in the sky. One day he got an opportunity he never expected. “A friend of a friend of the family who was an Army pilot took me for a ride in a Piper Cub. He did some things he probably shouldn’t have done and really gave me a scare. Even though it shook me, it also gave me the resolve to take lessons and become a flier. Little did I realize what an important part of my life aviation would become.”

Arnie logged over 18,000 hours of flying but he always remembered what life was like before taking to the skies. When he first joined the pro tour in 1955, he and Winnie caravanned across the country in a trailer that they both had to borrow $500 from their parents to afford. Says Arnie, “The trailer we found was a neat little rig shaped like a loaf of bread—nineteen feet long with a small kitchen, small bedroom and a very small bath. The key word here is small.” It didn’t bother them so much that the accommodations were confining. The non-stop driving from tournament to tournament was taking a toll. 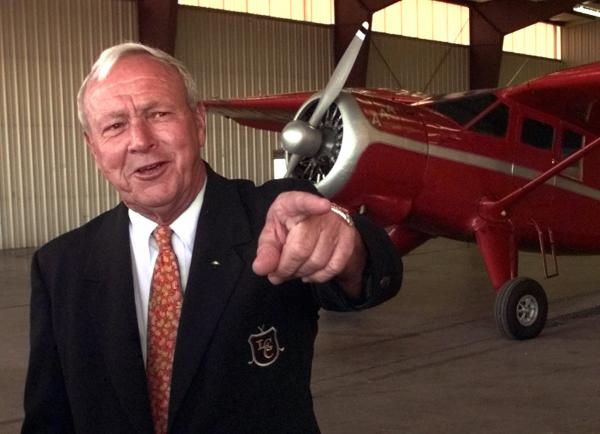 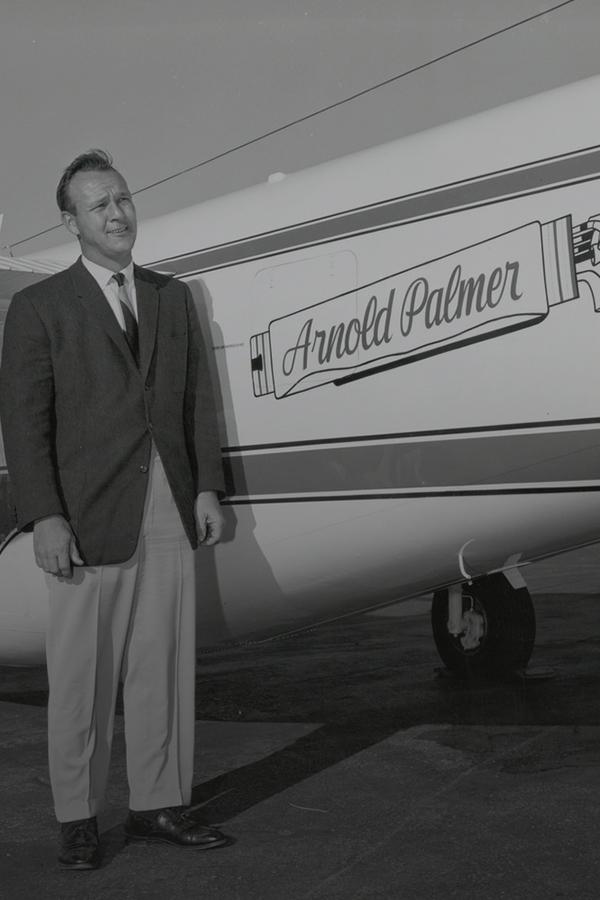 Says Arnie, “You don’t realize how big our country is until you drive it. On some of those longer jumps between tournaments, I almost literally climbed out of my car onto the first tee. All of that driving in the early years convinced me that flying was the only way to go.” Once Arnie’s daughters were born—Peggy in 1956 and Amy in 1958—he decided to make the ‘highways’ less and less a part of his life. He began taking flying lessons in a single-engine Cessna 172. Then after winning the Master’s in 1958, Arnie leased a Cessna 175 and hired a part-time copilot to fly with him. It wouldn’t be long before he’d be flying solo.

All of that driving in the early years convinced me that flying was the only way to go."

Arnie continued improving his flying skills and soon acquired “instrument and multi-engine ratings.” This meant he could now fly in all types of weather—anywhere. Says Arnie, “After I got down the basics, I had the thrill of my first solo flight—a spin over the Allegheny Mountains during which I felt the power of having the controls of the airplane entirely to myself.” By 1961 he was more than ready to purchase his first aircraft, an Aero Commander 500. This enabled him to do much of his traveling on the tour—in the air. Two-and-half years later he wanted even more sky power. 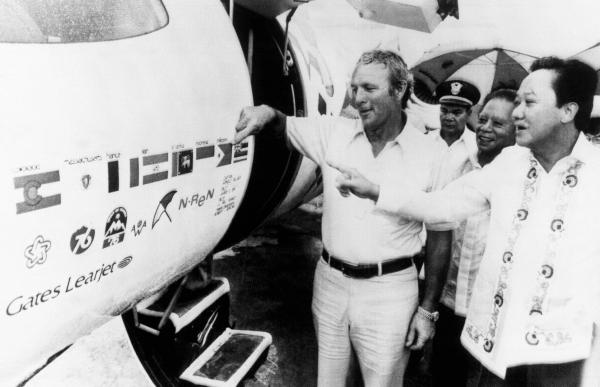 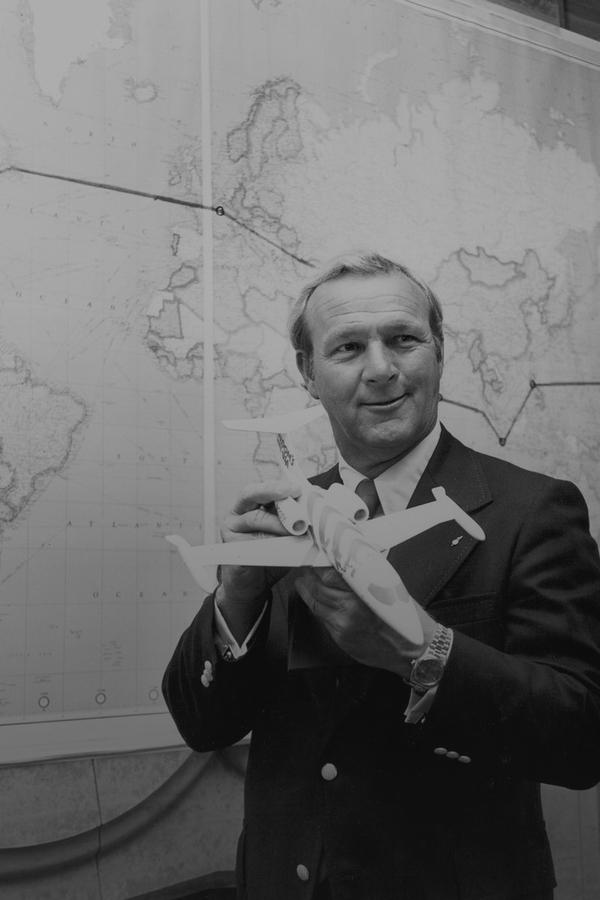 “In 1963, I purchased my second airplane, an Aero Commander 560F. It was brand new, more powerful, and roomier than the 500. It had a cruising range that would enable us to make it to Palm Springs from Latrobe with just one stop, cruising at 240 nautical miles per hour,” says Arnie. But his need for speed wasn’t quite yet quenched. In 1966 he acquired what he called his “latest capitalist tool,” a Rockwell Jet Commander. The leap to a corporate jet meant Arnie could now cruise at speeds up to 500 mph and his range was extended to 2000 nautical miles. The convenience of having a jet meant he could now sleep in his own bed on most nights. None of this, however, would have been possible without some major structural changes at the airport where he grew up hearing pilots tell their tales. For many years, Arnie served as a board member of the Airport Authority and with his input, the Latrobe facility experienced major expansion and modernization. A 7,000-foot runway and modern control tower were added. For his contributions to aviation in Western Pennsylvania, in 1999, the Westmoreland County Airport at Latrobe was renamed Arnold Palmer Regional Airport. 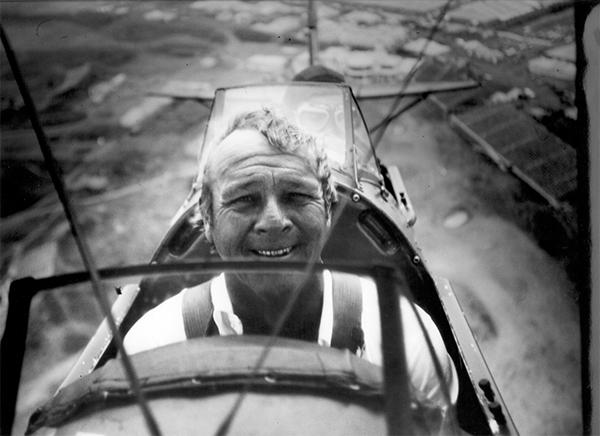 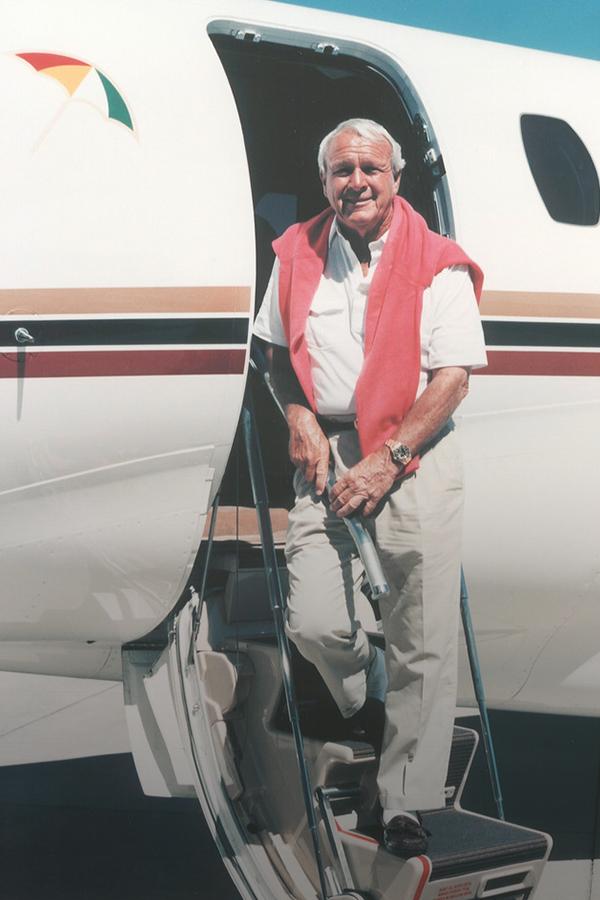 Since acquiring his first jet craft in 1966, Arnie upgraded numerous times. He’s owned a Lear Jet, five different Cessna Citation Jets and his last plane was a Citation X—an aircraft with intercontinental range, provided Arnie the ability to fly anywhere in the world. He always talked about the first time he saw the plane. “I was standing on the sixth fairway waiting to hit an approach shot in our annual gala that benefits the Latrobe County Hospital. I heard a familiar jet roar and looked up to see just about the most beautiful thing I’d ever seen—the new Citation X gliding right over us as it approached the Latrobe Airport.”

While spotting his new plane overhead was a great thrill, it may not have been Arnie’s biggest aeronautical adventure. He’s had the opportunity to fly alongside the Blue Angels in his Aero Commander, land a military jet on the aircraft carrier Eisenhower, and man the controls of a U.S. Air Force Thunderbird F-16. The Chairman of Boeing invited Arnie to test fly a 747. And not to be outdone by the competition, McDonnell Douglas let him fly their new DC-10. On May 19, 1976, he even set a world record by circumnavigating the globe in a Lear 36 in less than 58 hours. Arnie sums up his love of flying this way. “To put it quite simply, I could never have accomplished even half as much as I have in my golf and business careers over the last four decades without having my own airplanes.” 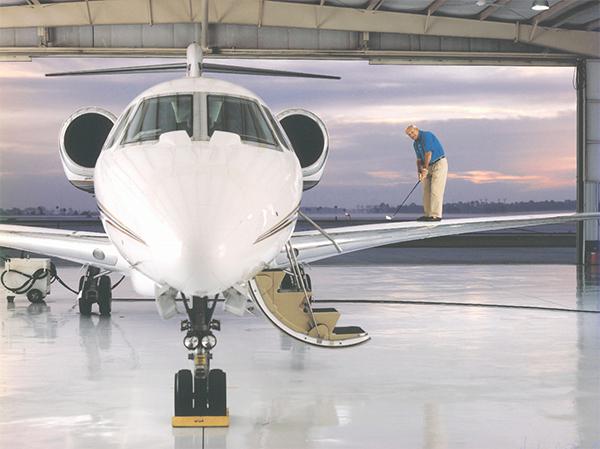